I shared in my last post how our neighbors started decorating at the beginning of the month. The girls love seeing all the spooky characters and skeletons and ghosts, but it’s killing our morning commute. 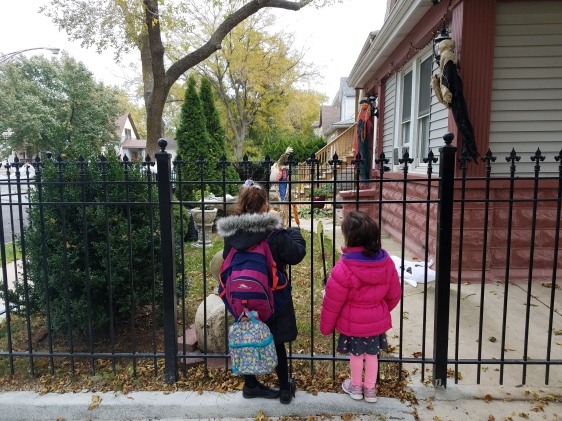 You see, we have to stop to check out all the creepy decor. So our usual 10-15 minute walk is now taking us closer to 20.

Of course, people’s displays grow and change as they find new pieces. So every morning is a new adventure.

And don’t get me started on the walk home! We are taking a solid 25 minutes and edging closer to a half an hour every day. Mainly because the biggest attraction is just around the corner from the house. 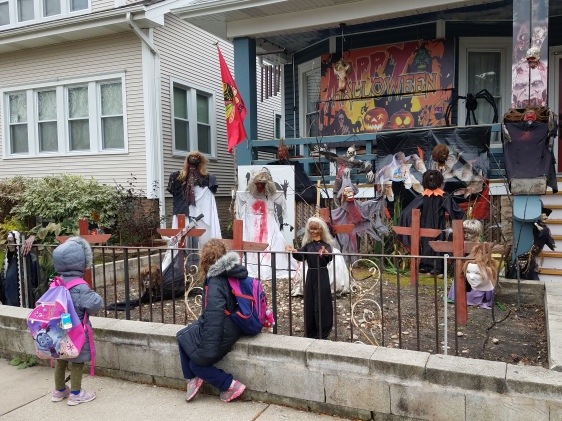 Thankfully, my girls are not afraid of all this gore and spookiness. And I guess we’ll get back on schedule soon enough. Until then, come great pumpkin!

I don’t know if you feel the same, but I thought I would share one Mom’s feelings about Halloween. She was sharing that after all of the activities, she feels that Halloween is so much more than the actual day; Halloween is now a season. I didn’t hesitate to agree with her.

I shared our Bengtson’s trip with you all from the last weekend in September. The decorations started going up in our neighborhood at the beginning of October. The Stairway to Insanity Haunted House has run the past three weekends. Friday was the school Halloween Party.

We still have the actual day to celebrate, and we haven’t carved pumpkins yet! Yikes!

The girls are having a blast. They are at ages where they have fun with the costumes and decorations, even though they are not quite ready for the haunted houses. And true to form for their ages, they have changed costumes almost daily for the last three weeks. Good thing we have a variety of dress-up clothes.

What are your thoughts about Halloween? So over it or just can’t wait? Either way, the 31st will bring it to a close. Now about those pumpkins…

That’s right, tonight and tomorrow are the last two nights of the Stairway to Insanity!

Tonight I’ll be climbing the stairway to the second floor of the St. Viator Elementary School Gymnasium. I am volunteering in tonight’s Stairway to Insanity Haunted House!

Not sure what you should do on this chilly, dreary, rainy night? Check out this review of last year’s haunt (this year is pending) and see if it doesn’t help you decide:

Come on over to the school for a value-haunt, spooky time. And then go out and get a big ol’ bowl of soup or some hot noodles or something else warm and filling. Whatever you do, make it a great night. We’ll see you out there, friends!

I’ve never been one to put stickers on my cars. This is strange to me because I have put them just on just about everything else I own. Bicycles, guitar cases, water bottles, notebooks, toolboxes – all decorated with a variety of stickers. I finally found one I could commit to however, and today put it on the ride.

This is the second year that Sweetie enrolled in Daisy Scouts through the school. She has two great troop leaders and a bunch of other Moms who step in to assist. Their focus is on crafts, activities and friendship. Of course they sell cookies, but they don’t fixate on the sales. Funny how many stories I hear of that ruining the experience.

I was a Cub Scout and Webelo growing up, so I dig her participation. While I don’t know how much knot-tying and fire-starting the girls are going to learn, they are off to a great start. Trips to nature centers and animal shelters, and singing at the school Winterfest are just a couple of the things they get into besides their meetings.

Got a scout (Cub, Boy, Daisy, Brownie, Girl, etc.)? I hope their/your experience is as good as ours has been. Remember to support ’em, those cookies don’t sell themselves! Ok, well, they kinda do! We’ll see you out there, friends.

This is pumpkin patch season. For years, Sister Scales-of-Justice has been inviting us to Bengtson’s Pumkin Festival in Homer Glen, Illinois. This year the girls were ready.

Attractions abound, with Autumn fun ranging from the Fun Barn to carnival-style rides with animatronics, like Spooky Skeleton bands, sprinkled here and there. 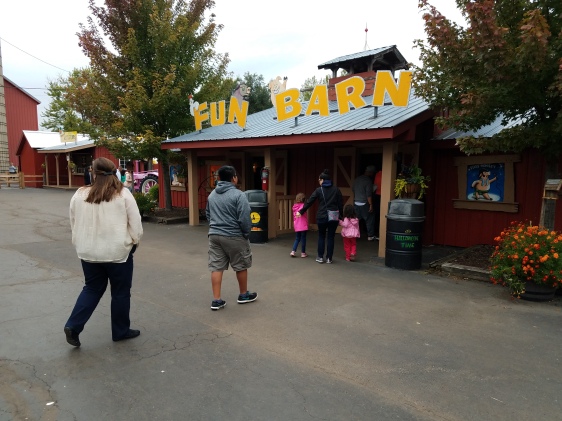 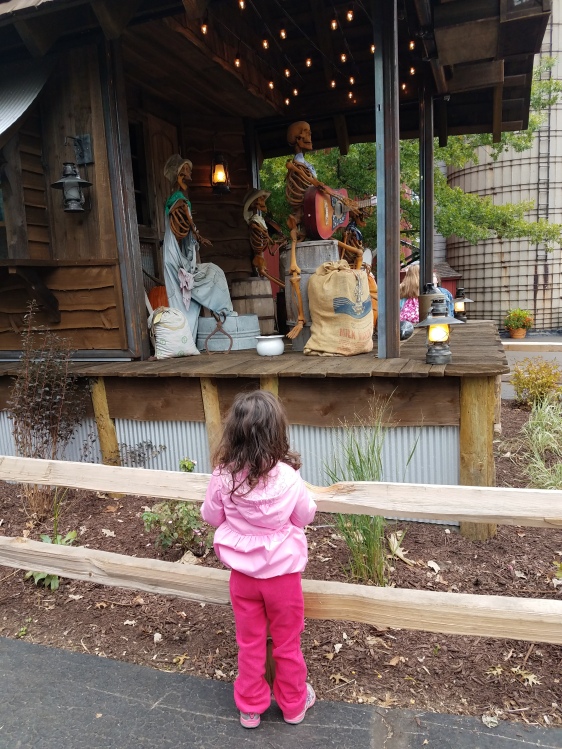 They also have animals! There are pony rides and a petting zoo. Pleasantly, both were super clean. Not just free of animal mess, but actually smelled good. It was great to let the girls enjoy themselves without cringy because the animals and pens were grimy. I almost forgot, they also have hourly pig races! There are four heats with the excited little guys running their circle track. Winner gets an iced oatmeal cookie!

Overall, the entire campus is kept clean, like super clean. The staff is on constant patrol for errant garbage. Many of the buildings are new and still have the fresh-cut lumber smell. Food options abound, ranging from snack to full barbeque or taco meals. The apple cider doughnuts were tasty, and we were sad we didn’t try the pumpkin churros.

This is not a sponsored review, so let’s insert some reality. The one downer I found at Bengtson’s was the lack of bathrooms. At least the indoor, running water type. To be clear (and fair), they have port-o-lets all over, strangely with sink troughs and soap right outside. But if you have a porta-potty hang-up, this arrangement would be off-putting. Our girls managed just fine.

If you are up for a drive, head to Homer Glen and check out Bengtson’s Pumpkin Festival. I didn’t mention it yet, but of course they have a pumpkin patch, with all sizes of pumkins and gourds for sale. Our girls loved all the action happening around the festival. We loved the clean grounds and amenities. Overall, Bengtson’s is some serious fall fun!

The second floor of the St. Viator Gymnasium is undergoing its annual transformation: 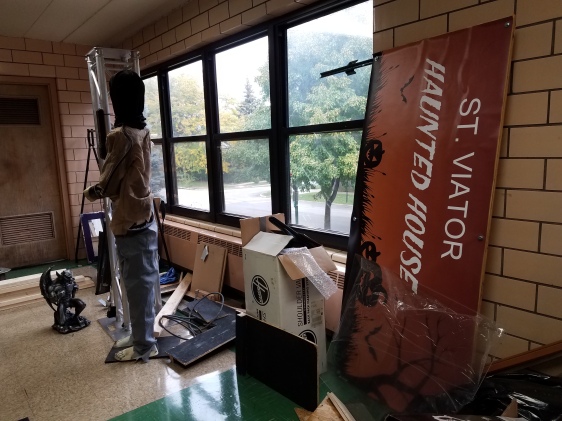 All these creepy things signify it is time for the haunted house! That’s right, the Stairway to Insanity is under construction again! I think I have noted before how I don’t love this name, but this year I learned the origin. The organizers used to carry all the props and all the walls up the stairs to set up. One of them thought, this is insanity,” and poof.

I will post another update as the decorations go up, and of course the flier when we get it. Here’s the quick info: $10 a ticket, running 7PM to 10 PM on Friday and Saturday for the next three weekends. If you’re looking for a creepy/scary (but not horrifying) time, consider this amateur, “value” haunt. They have an event page on Facebook, so check ’em out. Come Halloween!

Like many of you, and most of the country, I have been chomping on the Supreme Court Nomination hearings and subsequent testimonies for the past couple of weeks. I use the vague term “chomping” because some people are picking apart every detail while others are collecting a quick summary from a passing news feed. All over the spectrum. I don’t want to launch into anything political right now, but I will say that when I listened to Dr. Ford’s testimony in light of my experiences growing up in the Chicago Suburbs, I felt an awful familiarity with the scenario she described. Local pools, summer hang outs, parties, and entitled boys – yep, we had those here too. And looking at my girls now makes me feel that one could make any defensive claims one wants but I probably won’t lend a sympathetic ear when it comes to sexual harassment and assault. We’re in an ugly, but very necessary moment right now, friends. And with all this in my mind, I read this op-ed by Monica Hesse from The Washington Post:

Titled Dear dads: Your daughters told me about their assaults. This is why they never told you, this article is a gut check, a kick in the shin, a rough insight into yet another reality about why sexual harassment and assault are kept secret. And it’s written for us Dads. Now the article is well-written, not overly politicized and even somewhat cathartic, but it is still tough to read. But in my opinion, men and women alike should read it.

The long and short of it: daughters don’t want to disappoint their fathers.

The details unfold around that idea. What struck me is that now is the time for me to show my girls how I can rationally listen to their life stories; good, bad and ugly. Show them while they are young and hopefully we develop some space to talk about the hard life issues. We may be in an ugly moment, but my hope is that Dads are paying attention and thinking “caterpillar stage”, meaning work and live through the ugly in order to make something else. Something that flies higher, goes farther, does better. And I focus on men’s roles here because we are doing the majority of the harassing and assaulting. Blame socialization, evolution, television and popular media, whatever, but that’s the truth. Then move past blame and let’s start figuring this ugly sh*t out.

The politics of this whole nomination is making me angry. Honestly, the past three nominations have frustrated me, made me upset with the people working in our government system. So I guess, like with most things, this change will have to start at home. Let’s start with us, Dads. And Uncles. And Grandfathers. And Brothers. And Cousins. Hell, and neighbors and teachers and every other role where men influence boys and play a part in shaping the norms and mores of society. And in roles where men influence girls. And let’s open up to our female counterparts. Moms, Aunts, Sisters, Grandmothers, teachers, fabricators, engineers. Open an honest conversation, or maybe even shut up and listen. I know this is a bit of a rant, and I’m not typing here because I think I have some answer. But I know I’m not alone in looking for one.