Need a little help getting into the holiday spirit? The weather here in Chicago is not cooperating, so thankfully there’s the St. Viator WINTERFEST this weekend.  Check out this flier for a complete list of all the happenings. I know Wife and I are in the market for a real wreath, and we’ll see if Sweetie and Cricket want to decorate some cookies. I bet we all get after some hot chocolate (regardless of the weather). 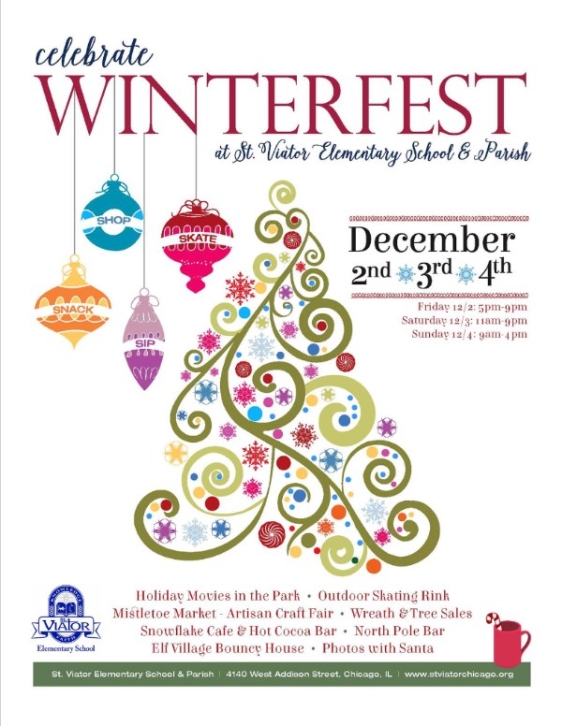 If you haven’t filled your weekend with plans consider coming up to the northside and enjoying some holiday spirit. ‘Tis the season!

Before I write on, let me explain that this post is purposely devoid of political opinions and commentary. I am still processing the election results, “getting my head right” as we used to say in the body shop. I don’t want to be one more voice on the internet ranting, so I will compose myself and compose my post for later this week. In the meantime, some pics of the Cricket…

Due to a busy end of the week and weekend, I didn’t get a chance to share Thursday’s lunch. The Cricket and I were out running errands after swim class and found ourselves travelling along Clark Street on Chicago’s northside. Of course, this is the same Clark Street that runs next to Wrigley Field, and we ran into all kinds of fans as we searched for lunch. We took Southport where it split off of Clark and settled on Crosby’s Kitchen at the corner of Southport and Cornelia.

Crosby’s Kitchen came up in my Google search for kid-friendly restaurants in Lakeview, a happening part of town. They serve American Fare in a comfortable environment. Once I read the menu I realized they were known for their rotisserie chicken. Oh, this was a big hint too:

The kid’s menu is just smaller portions of their adult fare, so the kiddos can get some of the delicious chicken as well. Cricket opted for the grilled cheese and I also shared bites of my chicken dip sandwich. Think french dip, but with a hunk of chicken. The Cricket loved the two types of cheese on her sandwich, and the toasted bread was soft. The french bread for my sandwich was also nice and soft, with just enough crunch in the crust. The chicken was moist and flavorful, so I almost didn’t use the au jus on the side. Overall, it was a good spot to find(and they’re not even paying me to say that!).

Usually I don’t like televisions around when I eat because I become a TV zombie. Given that it was the day after the Cubs won the World Series, it was nice to have some screens on over the bar. The server brought over some crayons for Cricket first thing, so she had something to do. She and I were able to enjoy our lunch surrounded by adults with and without children, so I did not feel like we were ruining anyone’s lunch at any time. And we left with full, happy bellies. So I’ll throw this place in the “toolbox”, cause we’ll visit here again. I know some of you out there can compose poems about restaurants and food, but I can’t. I will say that I did leave humming Finger Lickin’ Good by the Beastie Boys. You can check out Crosby’s Kitchen at 3455 N Southport here in Chicago.