I mentioned in an earlier post that Wife and I decided to renovate our house. We have lived happily in our Historic Chicago Bungalow for the past eight years. We had done a bit of maintenance and light remodeling, but last year we started feeling constrained by our home. While its three bedrooms fit our family well, there was no room for guests. The kitchen was an awkwardly laid out, contractor-grade rehab that was completed to sell the house (just before we purchased). And the one bathroom, also awkward and freshly “redone”, made for interesting family parties. Especially with rookie and newly potty-trained children around. One main level of living space was no longer cutting it.

We had some ideas for renovations, but no real plans. The attic was unfinished but the pitch of the roof made the space challenging. The basement is unfinished and concerns about water and musty odors delayed any action. We looked around in the area at houses that had the additional space we were looking for, but we didn’t find any that felt right. Wife and I have been ruined by our stout little brick house – it is definitely our home. But we needed to make some changes.

Chicago loves its Historic Bungalows, so there are many resources here for preserving, renovating, improving and enjoying your bungalow. We had attended a Historic Chicago Bungalow Association expo some years back, and there we saw an architectural presentation showing how creatively our house could be tweaked without losing its bungalow feel. We saw plans for additions with lots of daylight and interesting architectural details that stayed true to the character of the houses. So we started saving.

The process started last year, but this feels like a better time to start writing about it. First, we are done with the planning stages, so nobody can weigh-in on any of the design items. Second, the construction is underway and the site is secure, so it’s not easy to steal the appliances anymore. Third, I finally made the time to start writing about it. There are plenty of details to share, but here are the essentials: 80% of the ground floor is getting re-worked and a second-floor addition is going up. We are going from three bedrooms to four, and one bathroom to three. Thankfully there was room for an actual master bedroom and bath – woo-hoo! Here’s the general picture of the end result: 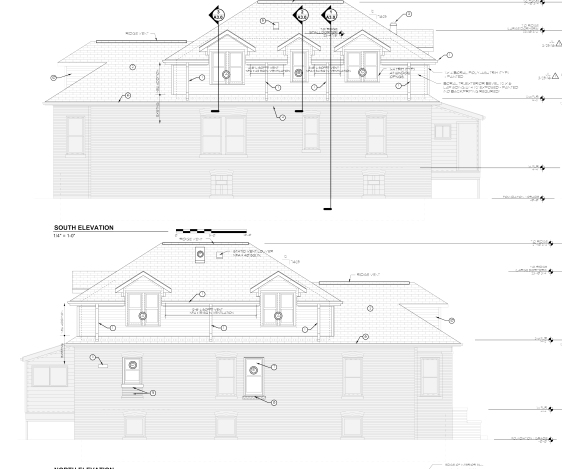 So everything in dark grey was existing. The details in light grey are the new. I know the notes make the picture busy, but you get the point. And as I mentioned, the work is moving along, so updates should come frequently. The view from the sidewalk remains the same until you are right in front of the house, so it doesn’t look like someone just dropped a shoebox on top of our house. Pretty exciting and scary stuff.

And so where are we? We are renting an apartment on the Southside from our family. Specifically the McKinley Park neighborhood. So maybe we’ll see you over at that playground if you’re in the area. Funny, but I thought about a post entitled, “Our Year in Exile”, but that seemed a bit dramatic. And are you truly living in exile if you have chosen it? Well, we’re three months into the nine month project, so this story will definitely be continued.

a blog that combines food & poetry mixed with vlogging