Chilly rain and overcast skies made a perfect day for…the aquarium! Sweetie and I spent today down at the John G. Shedd Aquarium.

Uh, Dad, there are no fish out here.

Today the admission was waived for Illinois residents, so free day at the Shedd! The plan was to have a group meet together to enjoy the day, but illness struck two of the households and another two canceled. The result was a Dad-Sweetie adventure day!

Sweetie got a kick out of all of the fish. Of course it was entertaining watching her point and talk to all of the fish. It was pretty fun listening to her call the smaller fish “babies” and make shushing noises for the fish that were sleeping (those not actively swimming). Many of the exhibits have water levels above three feet, so she could enjoy the fish even while sitting in her stroller. We both enjoyed checking out the crowds as well. With a full aquarium the people watching was great!

I have been going to the Shedd since I was a child. I was reminded of this by all of the day camp and school group students that surrounded us today. The last time I went was two years ago for wife’s birthday (she was actually pregnant with Sweetie). We took part in the “Trainer for a Day” program that the aquarium hosts. We spent that afternoon behind-the-scenes with an actual trainer and got hands-on with the beluga whales. So to all of the adults out there: When was the last time you went to the Shedd? 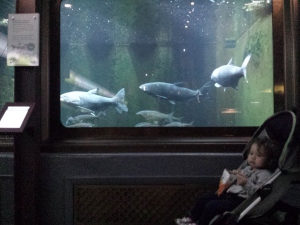 The Shedd Aquarium will be free for Illinois residents again on Monday, June 16 and Tuesday, June 17. They open at 9:00 am. and it was much more enjoyable early in the day (when we left the ticket line was long). There is still parking to contend with, which will set you back $22. And they frown on “outside” food, so we dropped about $20 on lunch. I will forgo the the cliché from the credit card commercial here, and just say a day at the aquarium with my daughter was pretty great.

So much to see

As is customary with so many experiences here on the detour, I found myself grateful for many things today. It starts with the friends who called to say they couldn’t make it. Given that they could have just blown me off, I appreciated the heads-up that they weren’t coming. That way I could just focus on Sweetie. Overall, I was thankful for the free day. The Shedd and all of Chicago’s museums have free days. It is just a matter of getting out and taking advantage of them. Lastly, I am thankful to a pair of students who found my lost cell phone and brought it to the Guest Services desk. That’s right, just after snapping some shots at the Caribbean Tank I lost my phone. Not realizing this, we went for a diaper change and headed toward the cafeteria. So I noticed my phone’s absence about fifteen minutes later and scuttled among the free-day crowds re-tracing my steps. It was then I spotted the Guest Services desk and decided to ask if it had been found. After I properly identified my phone I was informed by the man at the desk that “two elementary school girls” had brought the phone to him. Even he was surprised. I asked if he knew their school and he said no, so I just want to put my gratitude out there to the universe. And if this scenario sounds familiar to anyone out there, please let me know so I can thank those two students! They saved our good day!